Scott Allan Cohen has been described as a “dynamic pianist whose performances will leave his audiences breathlessly inspired. His attention to musical nuance and technical command of the piano, coupled with his confident showmanship provide an immensely satisfying musical experience.“ (Nicole Lemoine, Independent teacher and Chair of Membership VCMTA). “Scott Cohen is a brilliant pianist! I have enjoyed hearing him play the complete transcendental études of Franz Liszt in concert and was astounded by his stamina, technique, and musicality. Not only is he a virtuoso pianist but he is a wonderful teacher to aspiring students of all ages and has built a large and impressive network of teaching centers in Florida. He is an inspiring artist/teacher in the very best sense.” (CEO Chicago International Piano Competition and Festival, Dr. Mei Li) 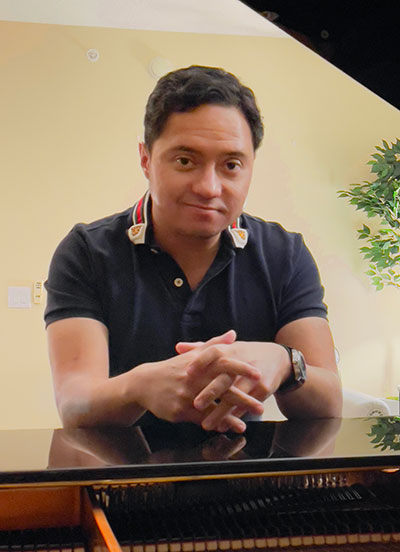 Professor Cohen began his studies at the age of six. He then earned his Bachelor of Music Degree from Stetson University with the Tinsley scholarship having studied under Dr. Michael Rickman. He then earned is Masters Degree from Tulane University with a Full Scholarship and Assistantship studying with Professor Faina Lushtak, former faculty member of Moscow Conservatory. He is now completing his Doctor of Musical Arts Degree at The University of Kansas with a Full Scholarship and Assistantship under Dr. Steven Spooner. During this time he won in several national and international competitions which include being top 7 in the country as a finalist for Music Teachers National Association in Chicago, first prize Orfeo International Music Competition Vipiteno, Italy, and First Prize Debose National Piano Competition. Piano Chair of Tulane University, Downman/ Eminent Scholars Trust Fund Chair, Professor Faina Lushtak describes his performances as “emotional, with extremely high level of technique. His knowledgeable and captivating playing commands attention both as a performer and pedagogue.” He has broken records at three institutions by performing the complete Transcendental Etudes by Franz Liszt.

As a pedagogue, Professor Cohen has taught a wide range of students from beginners serious competition performers. His music school has branches in three locations throughout Central Florida, including a studio penthouse by Walt Disney World. He is described as “a remarkably gifted teacher and classical pianist. He has an impressively broad repertoire that flows into his ability to adapt to teaching a high school student like our son or an advanced college student like our daughter. His passion for piano inspires his students and his meticulous approach prepares them well for competition. His academic and competitive achievements are remarkable, and we expect they are only the beginning.”(Kay and Dr. Alan Forbes)

He is an active concert pianist and pedagogue. He has participated and performed in numerous music festivals including Brandywine International Piano Festival, West Chester University, Goldansky Institute, Princeton University, Orfeo International Music Festival, Italy, Musicfest Perugia, Italy. At the present moment he performs regularly, is completing his Doctorate, serves on faculty at Orfeo International Music Festival in Northern Italy, and runs a music school. His doctoral research is focused on the Pianists of the Golden Age and adopting their ideas to present day performance practice.

Ready to give it a try?

Schedule your first piano lesson with Mr. Cohen! Enjoy the gift of music by learning how to play one of the most beautiful instruments in the world.